The Brown lab is interested in understanding the principles that govern bacterial morphology, a readily observable facet of microbial cell biology. One of the major unsolved questions in microbiology is how bacteria generate specific shapes. Bacteria exhibit an amazing diversity of shapes and sizes that are precisely reproduced at every generation, indicating that morphology plays an important role in the life of these bacteria. Impressive progress has been made in the past few years in understanding the mechanism of cell shape determination in a few model bacterial systems, including the discovery that bacteria possess a cytoskeleton, but we are still very far having a comprehensive understanding of how bacterial morphologies are generated. The Brown lab takes advantage of recent technical advances in microscopy, construction of fluorescent fusion proteins, and a gene depletion strategy, to make strides in understanding how bacteria generate specific morphologies.

In most bacteria, the cell wall is comprised of peptidoglycan and is a major determinant of cell shape. In a majority of rod-shaped bacteria, including E. coli, cells elongate by the lateral insertion of newly synthesized peptidoglycan along their sidewalls. In contrast, some rod-shaped bacteria utilize precise targeting of peptidoglycan to specific polar locations to enable cell elongation.  Indeed, we have previously shown that constrained polar growth is responsible for elongation in many species of Rhizobiales.

The Brown lab uses Agrobacterium tumefaciens, a well-studied plant pathogen and causative agent of crown gall disease, as a model to understand how bacteria constrain peptidoglycan synthesis to specific cellular localizations. Presently, we are focused on addressing the following key question:

What is the mechanism underlying growth and division of A. tumefaciens? 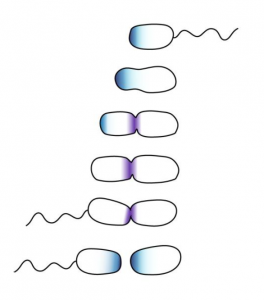 We know that peptidoglycan synthesis occurs at the cell pole during elongation and at mid-cell during cell division. Now we want to understand how and why bacteria in the Rhizobiales grow this way.

Why is this a challenging question?  Most of the known proteins involved in bacterial cell elongation are absent from the genome sequences of all bacteria belonging to the Rhizobiales. Thus, we cannot simply look for homologs of elongation proteins in other bacteria.  Instead we are using a number of approaches to identify candidate proteins involved in polar growth. We are also researching the mechanisms underlying cell division and cell separation. 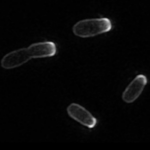 Some of the proteins involved in elongation of A. tumefaciens must be essential for cell survival. Bioinformatic analysis of data from a saturating transposon mutagenesis screen  allowed us to generate a prioritized list of candidate genes involved in polar elongation.  We are constructing strains (including disruptions, overexpression, and fluorescent protein fusions) to test our hypothesis that these may be involved in the elongation of A. tumefaciens. Thus far, we have focused on the role of PopZ and high molecular weight PBPs in polar growth.

Project 2. Understanding cell division in A. tumefaciens.
The process of cell division requires precise coordination of new cell wall biosynthesis and hydrolysis as the new poles are formed. We are characterizing proteins belonging to the 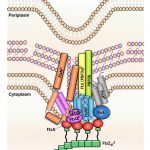 putative A. tumefaciens divisome, a complex of proteins which localizes to mid-cell and likely functions in cell division. We find that blocking cell division by depleting cell division proteins causes dramatic changes in cell morphology resulting in cell lysis. We are also interested in understanding how cells divide near mid-cell. Thus we have already characterized the Min system of A. tumefaciens and are currently searching for other mechanisms which regulate divisome positioning.

Project 3. How do cells separate in A. tumefaciens? 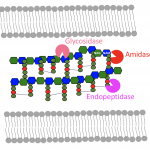 The final stage of cell division is the physical separation of the two daughter cells. During this time the cell wall must be hydrolyzed to allow the two new poles to form. We are systematically characterizing peptidoglycan hydrolytic enzymes to understand their contributions to the cell separation process. Since the activity of the enzymes is likely to be regulated both spatially and temporally we are also focusing on identifying and characterizing putative regulators of the peptidoglycan hydrolases.

Project 4. Characterization of bacteriophages that infect A. tumefaciens. 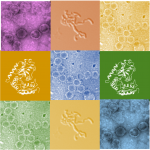 Bacteriophages are viruses that infect bacteria and thus have potential as biocontrol agents.  We are interested in isolating and characterizing bacteriophages that can infect A. tumefaciens. While cocktails of phages may be viable biocontrol options, we are also interested in understanding the mechanisms used by the phages to lyse the bacterial host cells. Phage enzymes that trigger host lysis may be candidate antimicrobial proteins.

Is there a practical application for this research? Yes, we expect that discovery of novel proteins involved in bacterial cell elongation may prove to be new targets for antimicrobial strategies.  This is particularly important given the presence of important animal and human pathogens (including Brucella, which is notoriously difficult to treat) with in the Rhizobiales.

Do you think this research sounds interesting?  Visit the Join Us page for more information about current opportunities in the Brown Lab.